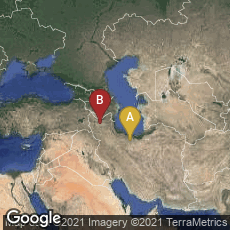 During the 19th century, under the rule of the Qajar dynasty, Persia (now Iran) increased its contacts with European governments, while at the same time enjoying periods of relative political stability and a growing sense of nationalism. In the arena of public health and medical education, these influences resulted in “a mounting sense of responsibility on the part of the Government with regard to its citizenry. Moreover, an emerging sense of national ‘shame’ [aberou] in the face of staggering epidemics, together with a growing need to counter Western imperial interventions resulted in stronger stimuli for the promotion of an organized policy of public health. Hence, Iran’s social, military, economic and mercantile interests became stronger advocates of sanitary reform” (Afkhami, p. 122).

In 1851, at the urging of Prime Minister Mirza Taghi Khan Farahani (میرزا تقی‌خان فراهانی‎) known as Amir Kabir (امیرکبیر‎), Persia established its first modern institution of higher learning, the Dar al-Fonun (Persian: دارالفنون‎) (English: Polytechnic, now the University of Tehran), which included a medical school for the training of army physicians. “Whereas Iranian Hakims of the mid-19th century could, in hindsight, have claimed to rival their European counterparts in therapeutics, a superior anatomical knowledge on the part of Western surgeons made them better caregivers on battlefields. Consequently, clinical instruction became a cornerstone of the Dar al-Fonun and like the academies of Europe, Amir Kabir also founded a ‘Government Hospital’ in January 1850 for the purpose of instructing medical students” (Afkhami, p. 123).

As part of this effort to modernize medical education in Persia, medical textbooks such as Mirza Mohammad-Vali’s Illumination of the Fundamentals of Medicine were written or translated by Persian authors and printed by lithography for publication by the Dar al-Fonun or the Dar al-Tabae, the state printing house established in the 1840s. Mirza Mohammad-Vali, who had been named chief physician of the Persian army in 1852, was also supervisor of the physicians at the Government Hospital and most likely taught at the Dar al-Fonun. Mirza Mohammad’s dependence on Western sources in this early period of modern Persian medical education is evident in his book’s numerous anatomical illustrations, adapted from Vesalius, Scarpa, Fabrici and other European authors.

The Qajar period also saw the introduction of the lithographic press, the first successful method for the mass production of books in Persia. Several attempts had been made to establish letterpress printing in Persia beginning in the 17th century, but casting type in Arabic script raised technical problems beyond those faced by typographers creating Roman typefaces, and it was not until the 1820s, when the first lithographic printing press began operating in Tabriz, that books, newspapers and other printed material began to be manufactured in Persia on a large scale.

“By the late 1840s, there were already at least six lithographic printing houses at work in Tehran, and dozens of books were published. From this time on, one can speak of regular lithographic book printing in Persia. The reasons for the success of the lithographic method of printing are obvious and well-known: simpler and cheaper equipment in comparison to that required for the typographic printing, availability of a large number of professional copyists, and the traditional culture of calligraphy. Although considerably less expensive than manuscripts, lithographed books retained the usual format of the handwritten codex in a sturdy binding . . . In the latter part of the 1840s, the State Printing House (dar al-taba a-ye dowlati) began its work; and was operative until the end of the first decade of the 20th century. After the opening of the Dar al-fonun (the first modern polytechnic on European lines in Persia) in 1851, a lithographic press was established within it for printing teaching aids. Activities of these two printing houses were of some significance for the cultural and scientific life of Persia, since they published books on new subjects: manuals on exact and natural sciences, both translated and original, and works on history and geography” (Shcheglova).