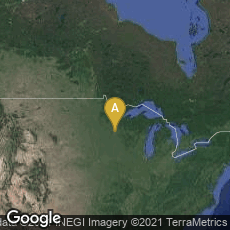 Atex, founded in Massachusetts in 1973, worked with the Minneapolis Daily Star newspaper to develop the first electronic pagination system that allowed the creation and output of full editorial pages, eliminating the need for manual paste-up of strips of film.

"Atex was founded in Massachusetts in 1973 by Douglas Drane and Charles and Richard Ying, graduates of MIT, who had an idea for a new type of electronic composition system. By 1974 they had created a prototype video display terminal, encased in a cardboard whiskey carton. The weekly news magazine US News & World Report was their first customer and an early investor.[2]

"By 1977, Atex had successfully connected reporters and editors via a paper-free system that allowed working on-screen instead of on typewriters. The system had a terminal-and-server paradigm, using modified DEC PDP-11 minicomputer hardware running a custom Atex multi-user operating system. Terminals were little more than keyboards, with the servers directly generating video signals for each terminal. The memory-mapped screen images were monochrome and not high resolution, but they could scroll quickly and fluidly without the constraints imposed by conventional serial data connections, which at the time were not very fast. The servers were paired for redundancy; each story saved to disk was written to two separate systems. The systems talked to each other across a high speed intersystem bus, making a set of up to 15 servers seem to their users to be one big system. A built-in messaging system provided email-like functionality among system users, greatly aiding collaboration. Wire stories were funneled into the system electronically rather than having to be re-keyboarded from teletype printouts. The workflow advantages of the system proved popular with staff and management of newspapers and large magazine publishers. The proprietary keyboards included a number of innovations which greatly facilitated text entry and editing.

"The system's early adopters in the daily newspaper industry included Newsday, The Hartford Courant, and the Minneapolis Star Tribune. Much of the growth can be traced to a series of patents Atex received in 1976 for its text editing and display system" (Wikipedia article on Atex (software) accessed 7-2019).

The Atex system featured "Atex Messaging" which is widely believed to be the forerunner of both email and instant messenger applications. Atex publishing systems were "based on highly modified Dec PDP-11 minicomputers, designed to produce news sections of newspapers. The systems included clustered CPUs, a distributed file system and dumb terminals that displayed memory-mapped video and featured keyboards with up to 140 keys: Distinctively, the cursor keys were on the left-hand side. A custom operating system tied everything together."