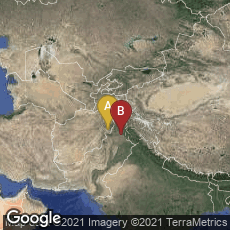 In September 1994, the British Library Oriental and India Office Collections acquired a collection of twenty‐nine fragments of manuscripts written on birch bark rolls in the Gāndhārī language and the Kharoṣṭhī script. They were said to have been preserved inside a clay pot, also bearing an inscription in the same language, in which they had been buried in antiquity. However, before their acquisition by the British Library they had been removed from the pot and forced inside thirteen modern glass jars, during which they were damaged considerably. After their acquisition by the British Library the rolls underwent a thorough restoration process. Analysis of these birch bark rolls indicates that they date from about the first century CE, making them the oldest Buddhist manuscripts, as well as the oldest Indian manuscripts known.

"The texts were written with a reed pen and black ink on scrolls consisting of sections of birch bark, which in most cases were glued together to form long strips. In general, the texts were written continuously over the recto and verso sides of the scroll, but in a few manuscripts only the recto is inscribed. All of the texts are incomplete and have suffered from varying degrees of loss and damage, in many cases severe. This is attributable in large part to the instability of old birch bark, which becomes extremely fragile and usually survives only in favorable conditions such as when it is placed in an airtight container. In all cases the upper parts of the scrolls have been completely lost, since this is the part that is most vulnerable to wear, being exposed on the outside when the scrolls are rolled up from the bottom. Although it is impossible to extrapolate any precise measurements from the original lengths of the complete scrolls, it appears that the largest and best-preserved specimens, such as fragment 15, whose surviving portion is about 115 centimeters long, might represent approximately half of the original scroll. The loss of the upper portions of the scrolls is particularly troublesome because it is at the top of the scrolls that we would expect to find titles and/or colophons of the texts, at least in the case of those written continuously on both sides. Due to these circumstances, such colophons are not found (but for one partial exception. . .) which renders the task of identifying the texts immeasurably more difficult" (Richard Salomon, Ancient Buddhist Texts from Gandhāra. The British Library Kharoṣṭhī Fragments [1999] 22).

"The exact findspot of these manuscripts is unfortunately unknown. But in the past several manuscripts of the same type have been reported to have been found in or around Haḍḍa near Jalalabad in eastern Afghanistan, although none of these have ever been published and most of them apparently are now lost. It is therefore likely that the new manuscripts came from the same region. This area closely adjoins the region known in ancient times as Gandhāra, the homeland of the Gāndhārī language and Kharoṣṭhī script, which were current from about the third century B.C. to the fourth century A.D." (http://www.ebmp.org/p_abt.php, accessed 01-19-2013).

"Although the British Library fragments are comparable to the Dead Sea scrolls and the Nag Hammadi manuscripts in that they give actual samples of the textual corpus of a much earlier phase of Buddhist tradition than had been previous available, they are unlikely to contain anything as radically unfamiliar as appeared in their Christian counterparts. The survey of the new fragments carried out to date, the results of which are summarized in the rest of this book, has revealed nothing that is startlingly as odds with early Buddhist doctrine as previously understood, nor is there much reason to expect that further analysis will turn up anything that will be. The importance of the new collection is on a different and perhaps less spectacular level, though this does not diminish its importance. These fragments give us an unprecedented direct glimpse into the contents of what appears to have ben a monastic collection or library of the Dharmaguptaka school in or around the first half of the first century A.D., and they are by far the earliest such sampling of a Buddhist textual corpus that has ever been found. It is likely, though not quite certain, that the British Library fragments are the oldest Buddhist fragments yet known, and in any case they are definitely the oldest coherent set of manuscript material" (Salomon, op. cit., 9-10).