The mechanism consists of a complex system of 30 wheels and plates with inscriptions relating to signs of the zodiac, months, eclipses and pan-Hellenic games. 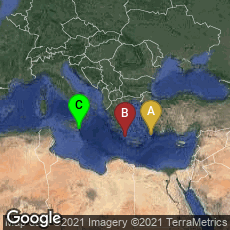 Image Source: cdn.arstechnica.net
Exploded" view, from Tony Freeth, of the new computer model of the Antikythera mechanism, showing how it might have worked.

The Antikythera Mechanism discovered off the island of Antikythera, Greece in 1900 or 1901, includes the only specimen preserved from antiquity of a scientifically graduated instrument. It may also be considered the earliest extant mechanical calculator. The device is displayed at the National Archaeological Museum of Athens, accompanied by a reconstruction made and donated to the museum by physicist and historian of science Derek de Solla Price.

"The Antikythera mechanism must therefore be an arithmetical counterpart of the much more familiar geometrical models of the solar system which were known to Plato and Archimedes and evolved into the orrery and the planetarium. The mechanism is like a great astronomical clock without an escapement, or like a modern analogue computer which uses mechanical parts to save tedious calculation . . . . It is certainly very similar to the great astronomical cathedral clocks that were built. . . ." in Europe beginning in the fourteenth century.

Applying high-resolution imaging systems and three-dimensional X-ray tomography, in 2008 experts deciphered inscriptions and reconstructed functions of the bronze gears on the mechanism. The results of this research, revealed details of dials on the instrument’s back side, including the names of all 12 months of an ancient calendar. Scientists found that the device not only predicted solar eclipses but also organized the calendar in the four-year cycles of the Olympiad, forerunner of the modern Olympic Games.

The new findings also suggested that the mechanism’s concept originated in the colonies of Corinth, possibly Syracuse, in Sicily. The scientists said this implied a likely connection with Archimedes, who lived in Syracuse and died in 212 BCE. It is known that Archimedes invented a planetarium which calculated motions of the moon and the known planets. It is also believed that Archimedes wrote a manuscript, which did not survive, on astronomical mechanisms. Some evidence had previously linked the complex device of gears and dials to the island of Rhodes and the astronomer Hipparchos, who had made a study of irregularities in the Moon’s orbital course.

In June 2106 an international team of archaeologists, astronomers and historians published the results of 10 years of researches on the mechanism in the first 2016 issue of the journal Almagest. Most significantly they were able to read texts preserved in the remains of the mechanisms by innovative imaging techniques.

The Inscriptions of the Antikythera Mechanism

3. The Front Dial and Parapegma Inscriptions

4. The Back Dial and Back Plate Inscriptions

5. The Back Cover Inscription