Title page of the first surviving publisher's catalogue in book form issued by Robert Estienne in 1542. From the copy in the Bibliothèque nationale de France. 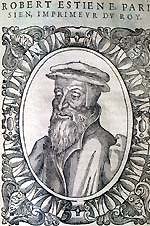 In 1542 printer and publisher Robert Estienne issued from Paris Libri in officina Rob. Stephani partim nati, parti restituti & excusi. This was the first publisher's catalogue issued in book form, of which any copies survived.

"Estienne's publications are listed in alphabetical order, some under their authors, others under their titles; prices are added, but no dates given. The Paris printers, such as Estienne, Colines, Wechel, Chaudière, and Janot, pioneered this form of publisher's lists, and, between 1542 and 1550 issued more than a dozen of them, each surviving in only or or two copies" (Breslauer & Folter, Bibliography: Its History and Development [1984] No. 13).