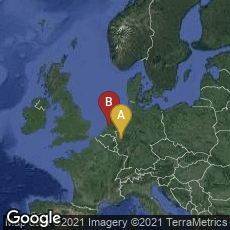 Portrait of Amelie Elisabeth von Hessen, the first known mezzotint, by Ludwig von Siegen, 1642. From the copy in the Metropolitan Museum of Art.

In 1642 German soldier and amateur artist Ludwig von Siegen invented the mezzotint process of printmaking. Mezzotint was was the first tonal method of printmaking, producing prints that have a more painterly appearance. The word derives from Italian meaning "half-painted." Von Siegen's first known mezzotint is a portrait of  Amelie Elisabeth von Hessen.

Mezzotint allows "half-tones to be produced without using line or dot based techniques like hatching, cross-hatching or stipple. Mezzotint achieves tonality by roughening the plate with thousands of little dots made by a metal tool with small teeth. In printing the tiny pits in the plate hold the ink when the face of the plate is wiped clean. A high level of quality and richness in the print can be achieved."