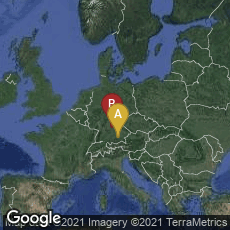 Wilhelm Ostwald, "Die Brucke" and its Goals for a World Information Clearing House In 1911 Karl Wilhelm Bührer and Adolf Saager published Die Organisierung der geistigen Arbeit durch die Brücke (The Organization of Intellectual Work through the Bridge) from Ansbach, Germany. This book described the aims of Die Brücke, Internationales Institut zur Organisierung der geistigen Arbeit (The Bridge, International Institute for the Organization of Intellectual Work), an institution founded in Munich on 11 June 1911 with the financial support of chemist Wilhelm Ostwald who donated his Nobel Prize money for the purpose.  In 1910 Ostwald had discussed problems of information management with Paul Otlet, co-founder of the Institut International de Bibliographie in Brussels. After only two years of existence The Bridge ended in 1913. It published numerous pamphlets, and perhaps the chief legacy of the project was the international standard for paper sizes (A4 etc.)

" 'Die Brücke is planned as a central station, where any question which may be raised with respect to any field of intellectual work whatever finds either direct answer or else indirect, in the sense that the inquirer is advised as to the place where he can obtain sufficient information' (Ostwald, 1913, p. 6, English original).

"The Bridge was supposed to be the information office for the information offices, a 'bridge' between the 'islands' where all other institutions—associations, societies, libraries, museums, companies, and individuals— 'were working for culture and civilization' (Die Brücke, 1910–1911). The organization of intellectual work was intended to occur 'automatically' through the general introduction of standardized means of communication— the monographic principle, standardized formats, and uniform indexing (Registraturvermerke) for all publications. The following facilities were planned: a collection of addresses, a Brückenarchiv as a 'comprehensive, illustrated world encyclopedia on sheets of standardized formats,' which should contain a world dictionary and a world museum catalog; a rückenmuseum; and a head office and Hochschule (college) for organization. 'Close cooperation' with the Institut Internationale de Bibliographie in Brussels was also planned."

Hapke, Thomas, "Wilhelm Ostwald, the 'Brücke' (Bridge), and connections to other bibliographic activities at the beginning of the twentieth century." Proc. 1998 Conf. History  and Heritage of Science Information Systems (1999).