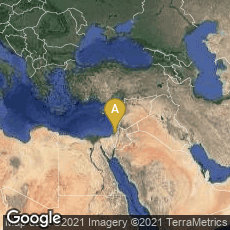 The Gezer Calendar, One of the Earliest Surviving Examples of Written Hebrew A tablet of soft limestone inscribed in a paleo-Hebrew script, the Gezer Calendar is one of the oldest known examples of Hebrew writing, dating to the 10th century BCE. It was discovered in excavations of the Biblical city of Gezer, 30 miles northwest of Jerusalem, by R.A.S. Macalister in his excavations between 1902 and 1907, and it is preserved in the Museum of the Ancient Orient in Istanbul.

"The calendar describes monthly or bi-monthly periods and attributes to each a duty such as harvest, planting or tending specific crops.

"One month of hoeing

"One month of harvest and festival

"One month of summer fruit

"Scholars have speculated that the calendar is either a schoolboy's memory exercise or perhaps the text of a popular folk song, or child's song. Another possibility is something designed for the collection of taxes from farmers."