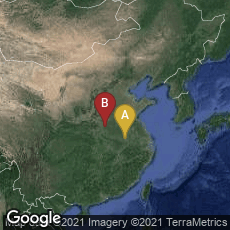 In China, Possibly the Earliest Attempt at Writing In April 2003 Dr. Garman Harbottle of the Brookaven National Laboratory in Upton,  New York, and a team of archaeologists at the University of Science and Technology of China, in Hefei, Anhui province, announced that signs carved into what appeared to be 8600 year-old-tortoise shells may be the earliest written words.

Other authorities urge caution regarding the dating of this material, and question whether it is actually written language. The symbols may have been recorded in the late Stone Age or Neolithic Age. The symbols also bear similarities to the oracle bone script used thousands of years later during the Shang dynastry, but it is unclear that these symbols were part of an actual writing system. The BBC reported:

"The archaeologists have identified 11 separate symbols inscribed on the tortoise shells.

"The shells were found buried with human remains in 24 Neolithic graves unearthed at Jiahu in Henan province, Western China.