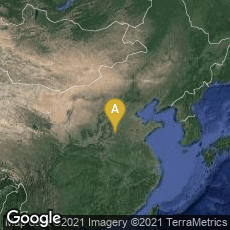 The Earliest Chinese Inscriptions that are Indisputably Writing 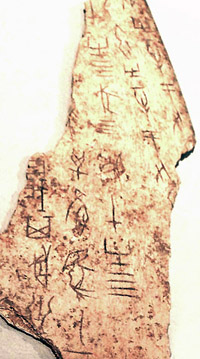 The oldest Chinese inscriptions that are indisputably writing are the Oracle bone script (Chinese: 甲骨文; pinyin: jiǎgǔwén; literally 'shell-bone-script') of the late thirteenth century BCE. It is not until the oracle-bone inscriptions that we find grammatically connected marks that certainly record language. Lack of archaeological evidence prevents addressing the related questions of how long before that time writing developed and in what contexts, or whether writing in China developed gradually or rapidly, and whether it developed exclusively in a religious context or, as in the ancient Middle East, it was tied to court adminstration.

"first identified by scholars in 1899 on pieces of bone and turtle shell being sold as medicine, and by 1928, the source of the oracle bones had been traced back to modern Xiǎotún (小屯) village at Ānyáng in Hénán Province, where official archaeological excavations in 1928–1937 discovered 20,000 oracle bone pieces, about 1/5 of the total discovered. The inscriptions were records of the divinations performed for or by the royal Shāng household. The oracle bone script is a well-developed writing system, attested from the late Shang Dynasty (1200–1050 BC). Only about 1,400 of the 2,500 known oracle bone script logographs can be identified with later Chinese characters and thus deciphered by paleographers."

"The late Shāng oracle bone writings, along with a few contemporary characters in a different style cast in bronzes, constitute the earliest significant corpus of Chinese writing, which is essential for the study of Chinese etymology, as Shāng writing is directly ancestral to the modern Chinese script. It is also the oldest member and ancestor of the Chinese family of scripts.

"The oracle bone script of the late Shāng appears archaic and pictographic in flavor, as does its contemporary, the Shāng writing on bronzes. The earliest oracle bone script appears even more so than examples from late in the period (thus some evolution did occur over the roughly 200-year period). Comparing oracle bone script to both Shāng and early Western Zhōu period writing on bronzes, oracle bone script is clearly greatly simplified, and rounded forms are often converted to rectilinear ones; this is thought to be due to the difficulty of engraving the hard, bony surfaces, compared with the ease of writing them in the wet clay of the molds from which the bronzes were cast. The more detailed and more pictorial style of the bronze graphs is thus thought to be more representative of typical Shāng writing (as would have normally occurred on bamboo books) than the oracle bone script forms, and it is this typical style which continued to evolve into the Zhōu period writing and then into the seal script of the Qín state in the late Zhōu period.

"It is known that the Shāng people also wrote with brush and ink, as brush-written graphs have been found on a small number of pottery, shell and bone, and jade and other stone items, and there is evidence that they also wrote on bamboo (or wooden) books just like those which have been found from the late Zhōu to Hàn periods, because the graphs for a writing brush (聿 yù) and bamboo book (冊 cè, a book of thin vertical slats or slips with horizontal string binding, like a Venetian blind turned 90 degrees) are present in the oracle bone script. Since the ease of writing with a brush is even greater than that of writing with a stylus in wet clay, it is assumed that the style and structure of Shāng graphs on bamboo were similar to those on bronzes, and also that the majority of writing occurred with a brush on such books. Additional support for this notion includes the reorientation of some graphs, by turning them 90 degrees as if to better fit on tall, narrow slats; this style must have developed on bamboo or wood slat books and then carried over to the oracle bone script. Additionally, the writing of characters in vertical columns, from top to bottom, is for the most part carried over from the bamboo books to oracle bone inscriptions. In some instances lines are written horizontally so as to match the text to divinatory cracks, or columns of text rotate 90 degrees in mid stream, but these are exceptions to the normal pattern of writing, and inscriptions were never read bottom to top. The vertical columns of text in Chinese writing are traditionally ordered from right to left; this pattern is found on bronze inscriptions from the Shāng dynasty onward. Oracle bone inscriptions, however, are often arranged so that the columns begin near the centerline of the shell or bone, and move toward the edge, such that the two sides are ordered in mirror-image fashion" (Wikipedia article on Oracle bone script, accessed 07-11-2009).

Edward L. Shaughnessy, "The Beginnings of Writing in China" IN: Woods (ed) Visible Language. Inventions of Writing in the Middle East and Beyond (2010) 215-24.