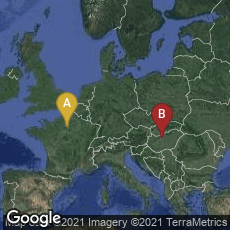 In 1931 Lázló Biró, a Hungarian-Argentinian newspaper editor frustrated by the amount of time wasted filling up fountain pens and cleaning up smudged pages, noticed that the ink used in newspaper printing dried quickly, leaving the paper dry and smudge-free. He tried using the same ink in a fountain pen but found that it would not flow into the tip, as it was too viscous. Working with his brother Georg, a chemist, Biró developed a new tip consisting of a tiny ball that was free to turn in a socket, which would pick up ink from a cartridge as it turned, and then roll to deposit it on the paper. He presented the first production of the ball pen at the Budapest International Fair in 1931, and patented it in Paris in 1938. This was the first commercially successful ballpoint pen, still known in England as a "Biro."

"Earlier pens leaked or clogged due to improper viscosity of the ink, and depended on gravity to deliver the ink to the ball. Depending on gravity caused difficulties with the flow and required that the pen be held nearly vertically. The Biro pen both pressurized the ink column and used capillary action for ink delivery, solving the flow problems."