Automata Invented by Heron of Alexandria

Heron of Alexandria. Diagram of an automaton, a Bacchus figure dispensing wine and milk in a small temple. The figure is connected by invisible pipes with hidden tanks containing wine and milk. Venice, Biblioteca Marciana, Gr. 516, fol. 202r. This 13th century codex is the earliest surviving text of Heron's Pneumatica. 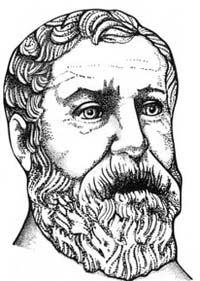 The dates of the Greek mathematician and engineer Heron of Alexandria (Hero of Alexandria, Ἥρων ὁ Ἀλεξανδρεύς) are not known with certainty, but he must have worked between the first and third century CE. Boas cites evidence in Heron's treatise Dioptra that Heron referred to an eclipse of the moon that occurred on March 13, 63, which would place him definitely in the first century. In Heron's numerous surviving writings are designs for automata—machines operated by mechanical or pneumatic means. These included devices for temples to instill faith by deceiving believers with "magical acts of the gods," for theatrical spectacles, and machines like a statue that poured wine. Among his inventions were:

♦ A windwheel operating a pipe organ—the first instance of wind powering a machine.

♦ The first automatic vending machine. When a coin was introduced through a slot on the top of the machine, a set amount of holy water was dispensed. When the coin was deposited, it fell upon a pan attached to a lever. The lever opened up a valve which let some water flow out. The pan continued to tilt with the weight of the coin until the coin fell off, at which point a counter-weight would snap the lever back up and turn off the valve.

♦ Mechanisms for the Greek theater, including an entirely mechanical puppet play almost ten minutes in length, powered by a binary-like system of ropes, knots, and simple machines operated by a rotating cylindrical cogwheel. The sound of thunder was produced by the mechanically-timed dropping of metal balls onto a hidden drum.

More illustrated technical treatises by Heron survived than those of any other writer from the ancient world. His Pneumatica, which described a series of apparatus for natural magic or parlor magic, was definitely the most widely read of his works during the Middle Ages; more than 100 manuscripts of it survived. However, the earliest surviving copy of this text, Codex Gr. 516 in the Bibliotheca Marciana in Venice, dates from about the thirteenth century— a later date than one might expect. Conversely, the complete text of Heron's other widely known work, the Mechanica, survived through only a single Arabic translation made by Kosta ben Luka between 862 and 866 CE. This manuscript is preserved in Leiden University Library (cod. 51).

The first publication in print of any of Heron's works appeared as a paraphrase of the early pages of the Pneumatica in the encyclopedic De expetendis et fugiendis rebus of humanist Giorgio Valla published in Venice the year after Valla's death, in 1501. The first printed edition of the complete text of the Pneumatica was the Latin translation from the Greek by mathematician and humanist Federico Commandino published as Heronis Alexandrini spiritualium liber (1575). The second work of Heron to be published in print was the translation from the Greek into Italian of Heron's work on automata by Commandino's pupil, the scientist and writer Bernardino Baldi, De gli automati, ouero machine se mouenti, libri due, first issued from Venice in 1589. Heron's Mechanica, a textbook for architects, engineers, builders and contractors, concerned the theoretical knowledge and practical skills necessary for an architect. It's complete text was first published in print in French translation from the Arabic as Les méchaniques ou l'élévateur de Héron d'Alexandrie publiées spour la première foi sur la version Arabe de Qostà ibn Lûqà et traduites en Français par M. le Baron Carra de Vaux. (1893).