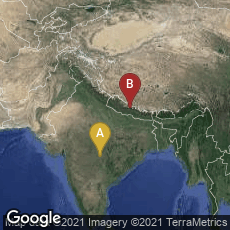 The Craft of Bookbinding Originated in India and Southeast Asia

Pārameśvaratantra Cambridge University Library MS Add.1049.1. f. 12 of 124. "One of the oldest known dated Sanskrit manuscripts from South Asia, this specimen transmits a substantial portion of the Pārameśvaratantra, a scripture of the Śaiva Siddhānta, one of the Tantric theological schools that taught the worship of Śiva as "Supreme Lord" (the literal meaning of Parameśvara). No other manuscript of this work is known, but nine chapters are transmitted in the Prāyaścittasamuccaya of Hṛdayaśiva (see Add. 2833), where the work is referred to as the Puskaratantra or Puṣkara-Pārameśvaratantra (see Goodall 1998, particularly p. xliii). According to the colophon, it was copied in the year 252, which some scholars judge to be of the era established by the Nepalese king Aṃśuvarman (also known as Mānadeva), therefore corresponding to 828 CE."

Palm-leaf manuscripts made out of dried palm leaves were used as writing materials in the Indian subcontinent and Southeast Asia as early as the 5th century BCE[1] and possibly much earlier.[2] They were written on dried and smoke treated palm leaves of Borassus species (Palmyra palm) or the Ola leaf (leaf of Corypha umbraculifera or the talipot palm).[2]

Along with the development of palm-leaf manuscripts, the craft of bookbinding originated in India and Southeast Asia. Religious sutra, meaning "a rope or thread that holds things together," were copied onto palm leaves cut in two, lengthwise, with a metal stylus. The leaf was then dried and rubbed with ink, which formed a stain in the stylus tracings in the leaf. The finished leaves were numbered, and two long twines were threaded through each end through wooden boards. When closed, the excess twine was wrapped around the boards to protect the leaves of the book. Buddhist monks took the idea of bookbinding from India through what we call Persia, Afghanistan, and Iran, to China in the first century BCE.

One of the oldest surviving palm leaf manuscripts is a Sanskrit Shaivism text from 828 CE, discovered in Nepal, and preserved at the Cambridge University Library: Pārameśvaratantra (MS Add.1049.1). University of Cambridge Digital Library provides a digital facsimile at this link.