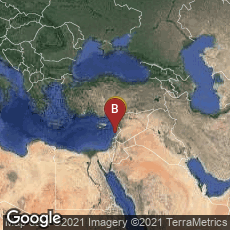 The Oldest Known Evidence of the Phoenician Alphabet The Ahiram Sarcophagus, discovered by the French archaeologist Pierre Montet in 1923 in Jbeil, Lebanon (the historic Byblos), is the oldest known evidence of the Phoenician alphabet. It is preserved in the National Museum of Beirut.

"Phoenician became one of the most widely used writing systems, spread by Phoenician merchants across the Mediterranean world, where it was assimilated by many other cultures and evolved. Many modern writing systems thought to have descended from Phoenician cover much of the world. The Aramaic alphabet, a modified form of Phoenician, was the ancestor of the modern Arabic and Hebrew scripts, as well as the Brāhmī script, the parent writing system of most modern abugidas in India, Southeast Asia, Tibet, and Mongolia. The Greek alphabet (and by extension its descendants such as the Latin, the Cyrillic and the Coptic), was a direct successor of Phoenician, though certain letter values were changed to represent vowels"(Wikipedia article on Phoenician alphabet, accessed 08-06-2009).

The low relief carved panels of the Ahiram Sarcophagus

"make it 'the major artistic document for the Early Iron Age' in Phoenicia. Associated items dating to the Late Bronze Age either support an early dating, in the thirteenth century BC or attest the reuse of an early shaft tomb in the eleventh century BC. The major scene represents a king seated on a throne carved with winged sphinxes. A priestess offers him a lotus flower. On the lid two male figures confront one another with addorsed [back to back] seated lions between them, read by Glenn Markoe as a reference to the father and son of the inscription. Egyptian influence that is a character of Late Bronze Age art in northwest Canaan is replaced here by Assyrian influences in the rendering of figures and the design of the throne and a table" (Wikipedia article on Ahiram, accessed 08-062009).