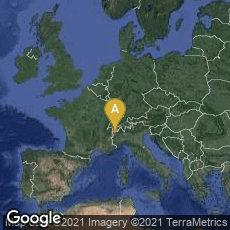 The oldest known consular diptych, preserved in the cathedral treasury at Aosta. The diptych was commissioned by Anicius Petronius Probus, consul in the western empire in 406 CE. 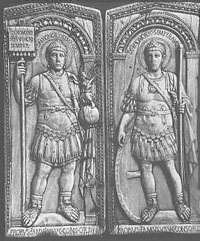 The oldest surviving diptych that can be called a consular diptych was commissioned by Anicius Petronius Probus, consul in the western empire in 406. It is the only consular diptych to bear the portrait of the emperor (Honorius in this instance, to whom the diptych is dedicated in an inscription full of humility, with Probus calling himself the emperor's "famulus" or slave) rather than a portrait of the consul. It is preserved in the cathedral treasury at Aosta.

Honorius was Emperor of the Western Roman Empire from 393 until his death in 423. Ascending to the throne at the age of only ten, Honorius was an especially weak military leader. In this diptych, however, he is portrayed in elaborate armor, holding an orb surmounted by a Victory, and a standard with the Latin words translated as "In the name of Christ, may you always be victorious." In actuality Honorius never led his troops in battle. At his death he left an empire on the verge of collapse.

A pair of linked panels, generally in ivory, wood or metal with rich sculpted decoration,  a diptych could function as a wax tablet for writing. More specifically a consular diptych was also intended as a deluxe commemorative object, commissioned by a consul ordinarius, and distributed to reward those who had supported his candidacy, and to mark his entry to that post.

"The chronology of such diptychs is clearly defined, with their beginnings marked by a decision by Theodosius I in 384 to reserve their use to consuls alone, except by an extraordinary imperial dispensation, and their end marked by the consulship's disappearance under the reign of Justinian in 541. Even so, great aristocrats and imperial civil-servants bypassed Theodosius's ban and produced diptychs to celebrate less important posts that the consulship - Quintus Aurelius Symmachus, for example, distributed some to commemorate his son's quaestorian then praetorian games in 393 and 401 respectively (Wikipedia article on consular diptych, accessed 11-19-2010).