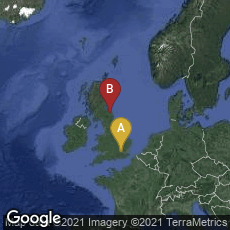 The earliest English newsbook, a forerunner of the newspaper, may be a pamphlet of 4 leaves called Hereafter ensue thee trew encountre or Batayle lately don betwene. Englande and: Scotlande. In whiche batayle the. Scottsshe. Kinge was slayne. It was printed in London by Richard Fawkes (Faques) and dated September 1513. The pamphlet provides an eyewitness account of the large and bloody Battle of Flodden Field won by the English against the Scots, with a list of the English heroes involved.

Printing and the Mind of Man. Catalogue of the Exhibitions Held at the British Museum and at Earls Court, London (1963) No. 640. Schwarz, Vivat Rex! An Exhibition Commemorating the 500th Anniversary of the Accession of Henry VIII (2009) No. 24.

The Morgan Library & Museum holds a contemporary manuscript account of the Battle of Flodden Field: MA 3673.  Schwarz, Vivat Rex! (2009) No. 25.