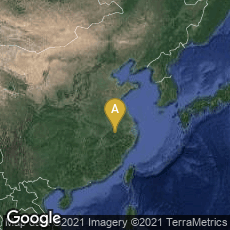 Wang Zhen, (simplified Chinese: 王祯; traditional Chinese: 王禎; pinyin: Wáng Zhēn; Wade–Giles: Wang Chen, fl. 1290 – 1333), an official of the Yuan Dynasty working in Jingde County in Anhui province, and author of the Nong Shu, developed movable type carved from wood in China around 1280 CE. The wood type was more durable than clay type, but worn pieces could only be replaced by carving new ones.

“ 'Now, however, there is another method [beyond earthenware type] that is both more exact and more convenient. A compositor's form is made of wood, strips of bamboo are used to mark the lines and a block is engraved with characters. The block is then cut into squares with a small fine saw till each character forms a separate piece. These separate characters are finished off with a knife on all four sides, and compared and tested till they are exactly the same height and size. Then the types are placed in the columns [of the form] and bamboo strips which have been prepared are pressed in between them. After the types have all been set in the form, the spaces are filled in with wooden plugs, so that the type is perfectly firm and will not move. When the type is absolutely firm, the ink is smeared on and printing begins.'

"Wooden movable type had been used and experimented with by Bi Sheng in the 11th century, but it was discarded because wood was judged to be an unsuitable material to use. Wang Zhen improved the earlier experimented process by adding the methods of specific type cutting and finishing, making the type case and revolving table that made the process more efficient.In Wang Zhen's system, all the Chinese writing characters were organized by five different tones and according to rhyming, using a standard official book of Chinese rhymes. Two revolving tables were actually used in the process; one table that had official types from the book of rhymes, and the other which contained the most frequently used Chinese writing characters for quick selection. To make the entire process more efficient, each Chinese character was assigned a different number, so that when a number was called, that writing character would be selected. Rare and unusual characters that were not prescribed a number were simply crafted on the spot by wood-cutters when needed.

"While printing new books, Wang Zhen described that the rectangular dimensions of each book needed to be determined in order to make the corrected size of the four-sided wooden block used in printing. Providing the necessary ink job was done by brush that was moved vertically in columns, while the impression on paper the columns had to be rubbed with brush from top to bottom.

“ 'In more recent times [late 13th century], type has also been made of tin by casting. It is strung on an iron wire, and thus made fast in the columns of the form, in order to print books with it. But none of this type took ink readily, and it made untidy printing in most cases. For that reason they were not used long.

"Although Wang Zhen's Nong Shu was mostly printed by use of woodblock printing, his innovation of wooden movable type soon became popularly used in the region of Anhui. Wang Zhen's wooden movable type was used to print the local gazetteer paper of Jingde City, which incorporated the use of 60,000 written characters organized on revolving tables. During the year of 1298, roughly one hundred copies of this were printed by wooden movable type in a month's time" (Wikipedia article on Wong Zhen (official), accessed 01-25-2012).

Printing by Handpress or by Hand
Technology / Engineering
Typography: Typesetting by Hand