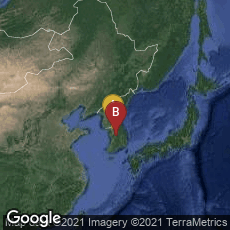 In 1377 Jikji Simche Yojeol, (Jikjisimcheyojeol) a Korean Buddhist document written by the Buddhist monk Baegun (Buddhist name Gyeonghan), was printed in Heungdeok Temple in Cheongju, South Korea during the Goryeo Dynasty. The was the first book printed from movable metal type.

Baegun's work, intended as a guide for students of Buddhism, comprised a collection of excerpts from the analects of the most revered Buddhist monks throughout successive generations. Originally issued in 2 volumes, only a single copy of the second volume survived, preserved in the division of Manuscrits orientaux in the Bibliothèque nationale de France.

"The Jikji 'had been in the collection of [Victor Emile Marie Joseph] Collin de Plancy, a chargé d'affaires with the French Embassy in Seoul in 1887 during the reign of King Gojong. The book then passed into the hands of Henri Véver [in an auction at Hotel Drouot in 1911], a collector of classics, and when he died in 1950, it was donated to the Bibliothèque Nationale de France, where it has been ever since.' Today only 38 sheets of the second volume of the metal print edition are extant.

"In May 1886, Korea and France concluded a treaty of defense and commerce, and as a result in 1887 official diplomatic relations were entered into by the treaty's official ratification by Kim Yunsik (1835-1922) and Victor Emile Marie Joseph Collin de Plancy (1853-1924). Plancy, who had majored in law in France and went on to study Chinese, had for six years served as translator at the French Legation in China between 1877 and 1883. In 1888 he came to Seoul as the first French consul to Korea, staying until 1891. During his extended residence in Korea, first as consul and then again as full diplomatic minister from 1896-1906, Victor Collin de Plancy collected Korean ceramics and old books. He let Kulang, who had moved to Seoul as his official secretary, classify them" (Wikipedia article on Jikji, accessed 09-09-2010).

In January 2014 an extensive website devoted to the Jikji was hosted by a South Korean NGO at this link.