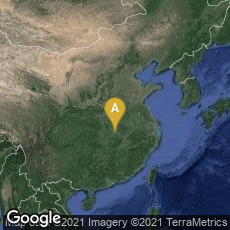 "The 2,300-year-old map marks the locations of buildings in the five mausoleums of Wang Cuo (344-313 BC), his queen, and his concubines. It is called the Zhao Yu Tu (“map of the area of the mausoleum”). “It is not only the oldest map ever found in China but the oldest numeral-bearing map in the world,” says Du Naisong, a researcher with the Palace Museum in Beijing’s Forbidden City. Thirty-seven inches long and 19 inches wide, the map marks more than 70 locations, and symbols, numerals, and epigraphs are inlaid with gold and silver. Unlike modern maps, the Zhao Yu Tu has south on top and north on the bottom. One-half inch equals 16.5 feet on the map’s scale" (http://www.archaeology.org/9803/newsbriefs/map.html, accessed 12-27-2009).

I wrote this entry in 2009. Eleven years later when I attempted to find an illustration of the map there was none available to a non-Chinese reader, and I could not tell if an appropriate image might be available on a Chinese website.