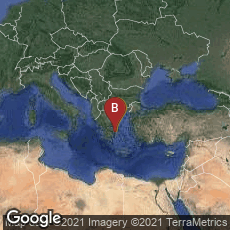 A: Athina, Greece, B: Greece

The Salamis Tablet, the Earliest Surviving Counting Board

Excluding counting on the fingers, counting boards are the earliest known counting device, and a precursor of the abacus. They were made from stone or wood and the counting was done on the board with beads or pebbles or or sand or dust.  These devices have also been called the "sandboard abacus." The earliest surviving example of a counting board or a gaming board may be a tablet found in 1846 CE on the Greek island of Salamis which dates back to about 300 BCE. Known as the Salamis Tablet, it is preserved in the National Archaelogical Museum, Athens.

"It is a slab of white marble 149 cm long, 75 cm wide, and 4.5 cm thick, on which are 5 groups of markings. In the center of the tablet is a set of 5 parallel lines equally divided by a vertical line, capped with a semi-circle at the intersection of the bottom-most horizontal line and the single vertical line. Below these lines is a wide space with a horizontal crack dividing it. Below this crack is another group of eleven parallel lines, again divided into two sections by a line perpendicular to them, but with the semi-circle at the top of the intersection; the third, sixth and ninth of these lines are marked with a cross where they intersect with the vertical line."  Three sets of Greek symbols (numbers from the acrophonic system) are arranged along the left, right and bottom edges of the tablet.