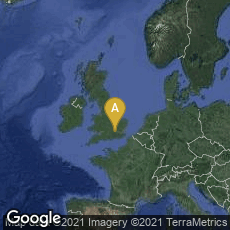 On February 12, 1935, as head of the Radio Research Station at Ditton Park near Slough, England, Robert Watson-Watt published a report entitled The Detection of Aircraft by Radio Methods.

"On February 26, 1935 Watson-Watt and [his assistant Arnold] Wilkins demonstrated a basic radar system to an observer from the Air Ministry Committee the Detection of Aircraft. The previous day Wilkins had set up receiving equipment in a field near Upper Stowe, Northamptonshire, and this was used to detect the presence of a Handley Page Heyford bomber at ranges up to 8 miles by means of the radio waves which it reflected from the nearby Daventry shortwave radio transmitter of the BBC, which operated at a wavelength of 49 m (6 MHz). This convincing demonstration, known as the Daventry Experiment, led immediately to development of radar in the UK."