Callimachus Produces the Pinakes, One of the Earliest Bibliographies An imaginary depiction of the Library of Alexandria. 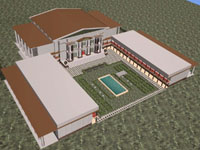 Around 200 BCE Kallimachos (Callimachus), a renowned poet and head of the Alexandrian Library, compiled a catalogue of its holdings which he called Pinakes (Tables or Lists). Supposedly extending to 120 papyrus rolls, this catalogue amounted to a systematic survey of Greek literature up to its time. It also represented the origins of bibliography. Only a few fragments survived the eventual destruction of the library, together with a scattering of references to it in other ancient works.

Callimachus’s bibliographical methods would not be out of place in a modern library; an analysis of the eight remaining fragments of the Pinakes shows that Callimachus

"1. divided the authors into classes and within these classes if necessary into subdivisions;

"2. arranged the authors in the classes or subdivisions alphabetically;

"3. added to the name of each author (if possible) biographical data;

"4. listed under an author’s name the titles of his works, combining works of the same kind to groups (no more than that can be deduced from the eight citations); and

"5. cited the opening words of each work as well as

"The Pinakes were neither an inventory nor an exhaustive catalog of the works in the library: they did not list all the copies of a work that the library owned and did not give an indication of how to locate a book in the library—actual access would have required consulting the librarian. The Pinakes built on preexisting practices of list making (including Aristotle's pinakes of poets), sorting (such as Theophrastus' doxographies sorted topically and chronologically), and alphabetizing, the principles of which were likely already understood although they had never been put to such extensive use before" (Blair, Too Much to Know. Managing Scholarly Information before the Modern Age [201] 17).

The surviving fragments of Kallimachos's Pinakes were first published in print in Hymni, epigrammata et fragmenta, edited by Theodor (Theodorus) J. G. F. Graevius et al. (2 vols, Utrecht, 1697). That edition included the first edition of the monumental 758-page commentary by Ezechiel Spanheim, and also incorporated the 420 fragments collected and elucidated by the English theologian, classical scholar and critic Richard Bentley, whose reading of these fragments represents “the earliest example of a really critical method applied to such a work" (Dictionary of National Biography). ". . . many even of his boldest conjectures have been completely confirmed by the papyri" (Pfeiffer, History of Classical Scholarship 1300-1850, 154.) Among the other commentaries and notes assembled in Graevius's edition are those by Henri Estienne, Nichodemus Frischlin, Bonaventura Vulcanius, and Anne Dacier.

♦ Apart from his contributions to bibliography, Kallimachos is known in the history of books for his quip in Fragments (ed. Pfeiffer) 465 that a "big book is a big evil" (μεγα βιβλιον μεγα κακων), a statement that he made in defense of the short lyric and elegiac poems he wrote and favored over longer epic poems. This has also been translated as "A great book is a great evil."

Breslauer & Folter, Bibliography. Its History and Development (1984) no. 1.  Blum, Kallimachos. The Alexandrian Library and the Origins of Bibliography. Translated by Hans H. Wellisch (1991).