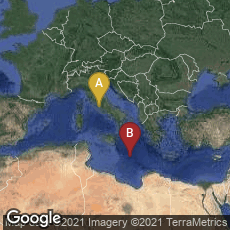 The Cursus publicus: The Courier Service of the Roman Empire A reconstructed statue of Augustus as a younger Octavian, circa 30 BCE

About 20 BCE the emperor Augustus created the Cursus publicus, the courier service of the Roman empire, to transport messages, officials, and tax revenues from one province to another. Though Augustus based the Roman system on the Persian model of relay riders passing a message from one courier to the next, he switched to a system in which one man made the entire journey carrying the message. This had the advantage of enabling the messenger to be questioned regarding additional information, and it may have provided additional security. However, it also slowed down the speed of communication.

Various authorities have estimated that the average speed of a messenger over the Roman road system was about 50 miles per day—a substantial reduction in speed from the relay methods used by the Persian Empire. The riders may have used light carriages called rhedæ with fast horses. Additionally, there was another slower service equipped with two-wheeled carts (birolæ) pulled by oxen. This slower service was reserved for government correspondence.