The Tabula Peutingeriana: the only Roman World Map that Survived from Antiquity 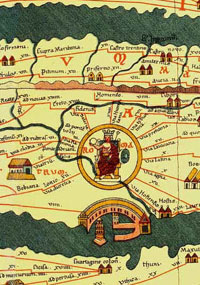 The Tabula Peutingeriana. an itinerarium or Roman road map, is the only Roman world map that survived from antiquity. It depicts the road network of the Roman Empire. The map survives in a unique copy, preserved at the Österreichische Nationalbibliothek in Vienna, made by a monk in Colmar, Alsace, in the thirteenth century, of a map that was last revised in the fourth or early fifth century. That, in turn, was a descendent of the map prepared under the direction of Marcus Vipsanius Agrippa, a friend of Augustus. After Agrippa's death the map was engraved on marble and placed in the Porticus Vipsaniae, not far from the Ara Pacis Augustae in Rome.

Description of the Map

The Tabula Peutingeriana "is a parchment scroll, 0.34 m high and 6.75 m long, assembled from eleven sections, a medieval reproduction of the original scroll. It is a very schematic map: the land masses are distorted, especially in the east-west direction. The map shows many Roman settlements, the roads connecting them, rivers, mountains, forests and seas. The distances between the settlements are also given. Three most important cities of the Roman Empire, Rome, Constantinople and Antioch, are represented with special iconic decoration. Besides the totality of the Empire, the map shows the Near East, India and the Ganges, Sri Lanka (Insula Taprobane), even an indication of China. In the west, the absence of the Iberian Peninsula indicates that a twelfth original section has been lost in the surviving copy. 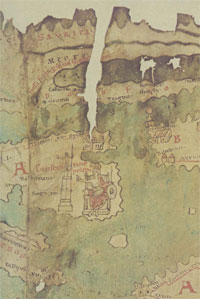 "The table appears to be based on "itineraries", or lists of destinations along Roman roads, as the distances between points along the routes are indicated. Travellers would not have possessed anything so sophisticated as a map, but they needed to know what lay ahead of them on the road, and how far. The Peutinger table represents these roads as a series of roughly parallel lines along which destinations have been marked in order of travel. The shape of the parchment pages accounts for the conventional rectangular layout. However, a rough similarity to the coordinates of Ptolemy's earth-mapping gives some writers a hope that some terrestrial representation was intended by the unknown compilers.

"The stages and cities are represented by hundreds of functional place symbols, used with discrimination from the simplest icon of a building with two towers to the elaborate individualized "portraits" of the three great cities. Annalina and Mario Levi, the Tabulas editors, conclude that the semi-schematic semi-pictorial symbols reproduce Roman cartographic conventions of the itineraria picta described by Vegetius, of which this is the sole testimony."

History of Ownership and Early Publication

The map is named after Konrad Peutinger, a German humanist and antiquarian, who inherited it from Konrad Birkel or Celtes, who claimed to have "found" it somewhere in a library in 1494.  It was copied for Ortelius and published shortly after his death in 1598. A partial first edition was printed at Antwerp in 1591 as Fragmenta tabulæ antiquæ by Johannes Moretus. Moretus printed the full Tabula in December 1598. The map remained in the Peutinger family until 1714, when it was sold.  After that it passed between royal and elite families until it was purchased by Prince Eugene of Savoy for 100 ducats.  Upon the prince's death in 1737 the map was purchased for the Habsburg Imperial Court Library (Hofbibliothek) in Vienna.

♦ In preparing his 2010 book Rome's World: The Peutinger Map Reconsidered, historian Richard Talbert collaborated with the staff of the Ancient World Mapping Center at the University of North Carolina at Chapel Hill, and with ISAW's Digital Programs team at New York University, to produce digital tools to record and analyze the map. These were published online, and could be accessed in October 2013: