17th century chased silver binding commissioned for the codex by Count Magnus Gabriel De la Gardie before he presented the codex to the University of Uppsala. 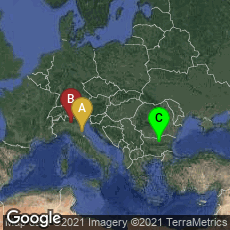 The Codex Argenteus, The Primary Surviving Example of the Gothic Language 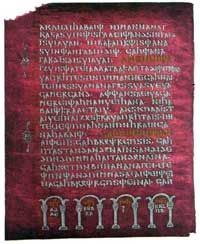 About 520 CE the Codex Argenteus (silver codex) was written in silver and gold letters on purple vellum in probably in Ravenna, or in the Po valley, or in Brescia, probably for the Ostrogothic ruler of Italy, Theodoric.

The Codex Argenteus contains fragments of the Four Gospels translated into Gothic by the fourth century Bishop Ulfilas (Wulfila), of Nicopolis ad Istrum (now Northern Bulgaria). It is the primary surviving example of the Gothic language, an extinct Germanic language that was spoken by the Goths, and set down in writing by Ulfilas who devised devised the Gothic alphabet. Of the original 336 leaves only 188 are preserved at the Carolina Rediviva library at the University of Uppsala, Sweden, plus one separate leaf, discovered, remarkably, in 1970 in the cathedral of Speyer in Germany.

During the Ostrogothic rule of Italy there was a bilateral Gothic-Latin culture, of which the Codex Brixianus, also produced in Italy at approximately the same time, survives as a Latin counterpart to the Codex Argenteus. It is believed that the Latin version of the Bible in the Codex Brixianus may be the Latin text from which Ulfilas translated the Bible into Gothic.

"With the end of Gothic rule the Gothic manuscripts in Italy were rendered valueless; what remained of them (with the exception of the Codex Argenteus) became part of that waste material which in the seventh and eighth centuries was re-used in Bobbio" (Bischoff, Latin Palaeography: Antiquity and Middle Ages [1990] 186).

After about a thousand years during which the Codex Argenteus appeared in no inventories, it was rediscovered in the middle of the 16th century in the library of the Benedictine monastery of Werden in the Ruhr, near Essen in Germany (Werden Abbey). This abbey, whose abbots were imperial princes with a seat in the imperial diets, was among the richest monasteries of the Holy Roman Empire. The Dutch physician, humanist, and linguist Johannes Goropius Becanus published the first mention of the manuscript in his 1569 book Origines Antwerpianae. In 1665 Franciscus Junius the Younger published the editio princeps of the text as Quatuor D. N. Jesu Christi euangeliorum versiones perantiquae duae, Gothica scil. et Anglo-Saxonica (Dordrecht, 1665).

In 1597 Bonaventura Vulcanius, professor of Greek at Leiden, published portions of the Gothic Bible text from the Codex Argenteus in a collection of treatises on the Goths which he edited for publication by the Plantin Press. In his preface to one of these treatises, De literis et lingua Getarum sive Gothorum, Vulcanius wrote that it represented two brief disserations by an unidentifiable scholar, the first of which he said was "concerned with the script and prounciation, and the other with the Lombardic script, which the author said he copied from a manuscript codex of great antiquity which he called 'the Silver.' This was the first publication in print of any Gothic text, and it gave the manuscript its name, Codex Argenteus. Vulcanius identified Ulfilas as the translator of Gothic text of the Bible. Vulcanius's book included images of Gothic script as compared to other ancient languages.

"Later the manuscript became the property of the Emperor Rudolph II, and when, in July 1648, the last year of the Thirty Years' War, the Swedes occupied Prague, it fell into their hands together with the other treasures of the Imperial Castle of Hradcany. It was subsequently deposited in the library of Queen Christina in Stockholm, but on the abdication of the Queen in 1654 it was acquired by one of her librarians, the Dutch scholar Isaac Vossius. He took the manuscript with him to Holland, where, in 1662, the Swedish Count Magnus Gabriel De la Gardie bought the codex from Vossius and, in 1669, presented it to the University of Uppsala. He had previously had it bound in a chased silver binding, made in Stockholm from designs by the painter David Klöcker Ehrenstrahl" (http://www.ub.uu.se/arv/codexeng.cfm, accessed 11-22-2008).

Munkhammar, Lars. The Silver Bible: Origins and History of the Codex Argenteus. (Uppsala, 2011).

In 2019 a digital facsimile of the Codex Argenteus was available from alvin-portal.org at this link.

The Codex Brixianus, Related to the Codex Argenteus
The Golden Gospels of Henry VIII: Written by Sixteen Different Scribes