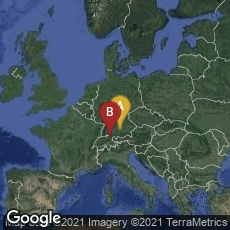 A page from the only complete copy of the Constance Gradual, preserved in the British Library.

The earliest music printed from movable type appeared in the Constance Gradual or Graduale, perhaps issued in Konstanz or Augsburg, by "the printer of the Constance Breviary" about 1473.

"It lacks both a date and a printer's name, but the type used to print the text is identical with that of the 'Constance Breviary', one copy of which was rubricated in 1473. Because the press which used this type had but a short life, the Gradual may be assigned to this year, or a little later. It was printed, if not at Constance, certainly at some town in the southern part of Germany where the printing of books had begun some twenty years before. The music is printed from movable type in Gothic notation. . . ." (King, Four Hundred Years of Music Printing [1968] 9, plates I & II).

Only two copies of the Constance Gradual survived: a complete copy preserved in the British Library, and a fragment at Tübingen. ISTC No.:ig00329700.