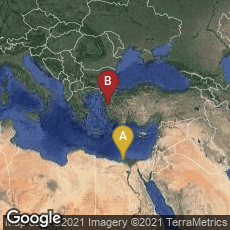 The Library of Pergamum (Pergamon) is Founded Around 197-159 BCE rulers of Pergamum (Pergamon; now Bergama in Turkey) founded a major library. Whether this was in competition with the Alexandrian Library, or just a worthy independent effort, remains the subject of speculation. This project, and the vast buildings constructed for the purpose, is associated with the rule of king Eumenes II. The Library of Pergamum supposedly contained 200,000 papyrus rolls— the second largest library in the ancient world; however, we have no factual basis for calculating the number of rolls either at Alexandria or at Pergamum.

"Legend has it that Mark Antony later gave Cleopatra all of the 200,000 volumes at Pergamum for the Library at Alexandria as a wedding present, emptying the shelves and ending the dominance of the Library at Pergamum. No index or catalog of the holdings at Pergamum exists today, making it impossible to know the true size or scope of this collection.

"Historical accounts claim that the library possessed a large main reading room, lined with many shelves. An empty space was left between the outer walls and the shelves to allow for air circulation. This was intended to prevent the library from becoming overly humid in the warm climate of Anatolia and can be seen as an early attempt at library preservation. Manuscripts were written on parchment, rolled, and then stored on these shelves. A statue of Athena, the goddess of wisdom, stood in the main reading room" (Wikipedia article on Library of Pergamum, accessed 12-24-2009).

♦ Pergamum is sometimes associated with the invention of parchment (charta pergamena). However, writing on prepared animal skins had a long history. Some Egyptian Fourth Dynasty texts were written on parchment. Though the Assyrians and the Babylonians inscribed their cuneiform on clay tablets, they also wrote on parchment from the 6th century BCE onward, and Jews wrote on parchment rolls. It has been argued that the Pergamene authorities were forced to fall back on parchment when supplies of papyrus from Egypt were interrupted during the invasions of Egypt by Antiochus IV Epihanes. During this period scholars from Pergamum may have introduced parchment to Rome where the shortage of papyrus would have had an even greater impact. It has also been conjectured that the Pergamenes may have discovered that "by simplifying the composition of the pelt preparation bath, allied with a special mode of drying wet unhaired pelts (by stretching them as much as possible) smooth taut sheets of uniform opacity could easily be obtained" (Roberts & Skeat, The Birth of the Codex [1983] 9).

Clark, The Care of Books (1901) 9 reproduces a plan of the "temple and precinct of Athena, Pergamon; with that of the Library and adjacent buildings."