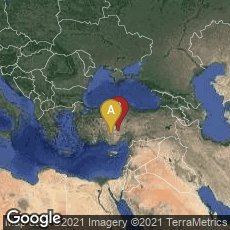 A: Konya, Turkey, B: Aksaray, Turkey

A Wallpainting that Could be a Landscape or a Map, or a Forgery

In 1961 Catal Huyuk, or Çatalhöyük, a very large Neolithic and Chalcolithic settlement in southern Anatolia (now Turkey) of which the lowest layers date from around 7500 BCE, was discovered. It is the largest and best preserved Neolithic site found to date.

A wall painting radio carbon dated to approximately 6200 BCE, found in 1963 at this site by archaeologist James Mellaart, may be the earliest landscape painting known, or it may be a map, or a forgery.

"It appears to represent the town itself with eighty rectangular buildings of varying sizes clustered in a terraced town landscape. Mellaart noted the similarity of the representation of the houses to the actual excavated structures found at the site, that is, rows of houses built one beside the other with no space between them. The wall painting shows an active double-peaked volcano rising over the town, likely to be the 3,200 m stratovolcano Mount Hasan, which is visible from Catal Huyuk. Lava is depicted flowing down its slopes and exploding in the air above the town. A cloud of ash and smoke completes the scene" (Rochberg, "The Expression of Terrestrial and Celestial Order in Ancient Mesopotamia," IN: Talbert (ed) Ancient Perspectives: Maps and Their Place in Mesopotamia, Egypt, Greece & Rome [2012] 10-11).

However, some archaeologists have suggested that the wall painting is more likely a painting of a leopard skin instead of a landscape including a volcano, or a decorative geometric design instead of a map. The painting is preserved in the Museum of Anatolian Civilizations in Ankara, Turkey. Or it may be a forgery.

"In 2018 Mellaart's son and the Swiss-German geoarchaeologist Eberhard Zangger published an investigation according to which Mellaart had fabricated extensive forgeries in support of his theses.[10][11] After investigating the late Mellaart's apartment, Zangger revealed that Mellaart "faked several of the ancient murals and may have run a 'forger's workshop' of sorts."[2] These forgeries included prototypes of murals and engravings that Mellaart had claimed to have discovered in Çatalhöyük" (Wikipedia article on James Mellaart, accessed 8-2020).