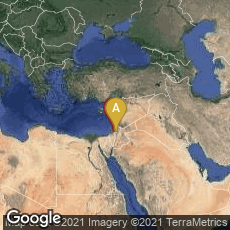 "The Community Rule (Serekh Hayahad, 1QS), formerly called the "Manual of Discipline," is the major section of one of the first seven scrolls discovered in Cave 1 at Qumran in 1947. Written in Hebrew in a square Hasmonean script, it was copied between 100 and 75 BCE."

The Dead Sea Scrolls, which were discovered between 1947 and 1956 in eleven caves near Khirbet Qumran, on the northwestern shores of the Dead Sea have been dated between 300 BCE and 68 CE, on the basis of historical, paleographic, and linguistic evidence, as well as carbon-14 dating. Because they date from the late Second Temple Period, when Jesus of Nazareth lived, the Dead Sea Scrolls are older than any other surviving manuscripts of the Hebrew Scriptures, except for the Nash Papyrus, by almost one thousand years. They are preserved in The Shrine of the Book at the Israel Museum in Jerusalem.

“Most of the scrolls were written in Hebrew, with a smaller number in Aramaic or Greek. Most of them were written on parchment, with the exception of a few written on papyrus. The vast majority of the scrolls survived as fragments—only a handful were found intact. Nevertheless, scholars have managed to reconstruct from these fragments approximately 850 different manuscripts of various lengths.

"The manuscripts fall into three major categories: biblical, apocryphal, and sectarian. The biblical manuscripts comprise some two hundred copies of books of the Hebrew Bible, representing the earliest evidence for the biblical text in the world. Among the apocryphal manuscripts (works that were not included in the Jewish biblical canon) are works that had previously been known only in translation, or that had not been known at all. The sectarian manuscripts reflect a wide variety of literary genres: biblical commentary, religious-legal writings, liturgical texts, and apocalyptic compositions. Most scholars believe that the scrolls formed the library of the sect (the Essenes?) that lived at Qumran. However it appears that the members of othis sect wrote only part of the scrolls themselves, the remainder having been composed or copied elsewhere” (Shrine of the Book. Introduction to the Dead Sea Scrolls, accessed 12-24-2009).

In December 2012 the Leon Levy Dead Sea Scrolls Digital Library was launched by the Israel Antiquities Authority in partnership with Google Israel, making high resolution images of the scrolls freely available. The site was launched 11 years after the completion of the publication of the Dead Sea Scrolls, initiated and sponsored by the IAA, and 65 years after the first scrolls were unearthed in the Caves of Qumran.