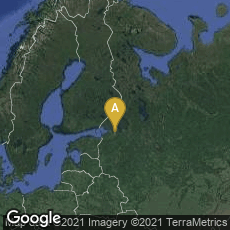 Burning of the Library of the Academy of Sciences Library in St. Petersburg, One of the Worst Library Fires in History Library of the Russian Academy of Sciences in Saint Petersburg, photo taken in 2015.

On February 14, 1988 fire broke out in the newspaper room on the third floor of the Academy of Sciences Library in Saint Petersburg.

"By the time it was extinguished the following afternoon, it had destroyed 400,000 books of the 12 million housed in the building; two to three million more were damaged by heat and smoke; and over one million were damp or wet from the firemen's hoses. The extent of the damage made it the worst library fire in history. (The Los Angeles Public Library fire by comparison, also destroyed 400,000 books, but damaged only a half million by heat and smoke.)

"Many of the lost volumes were part of the Baer Collection of foreign scientific works: an early estimate gives 300,000, a later one 190,000, as the number lost. The rest were Russian books, many of then early scientific and medical books from the 17th, 18th and 19th centuries." (The Abbey Newsletter Volume XII, number 2 [1988].)