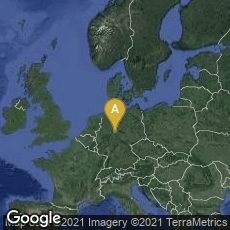 Folio 1 of Codex 2527, preserved at the Austrian National Library. 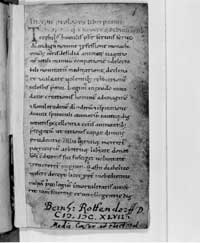 "The work is divided into three volumes. The first covers the production and use of painting and drawing materials (painting techniques, paints, and inks), especially for illumination of texts and painting of walls. The second deals with the production of stained glass and techniques of glass painting, while the last deals with various techniques of goldsmithing. It also includes an introduction into the building of organs. Theophilus contains perhaps the earliest reference to oil paint."

Theophilus also provides some of the earliest instructions for the use of metalpoints in drawing:

"Indications of the use of metalpoints for artistic purposes, other than those mentioned in connection with manuscripts, were rare until the late fourteenth century, a period which can be associated with the early fourishing of drawing as an important art form. Therefore, instructions for the use of metalpoints by the monk Theophilus, written sometime during the tenth to twelfth centuries, were exceptional. In Diversarum Artium Schedula Theophilus wrote that preparatory designs for windows were delineated upon large boards or 'tables' which had been rubbed with chalk. Over this surface one drew images with lead or tin. Moreover, in his directions for design figures to be incised on ivroy Theophilus recommended that the ivory tablet be covered with chalk, upon which one drew figures  with a piece of lead. These medieval 'grounds' of chalk dust were antecedents of a rudimentary method of preparing metalpoint surfaces with the dust of bones, chalk, or white lead which was described by Cennino in the late fourteen or early fifteenth century, and of a similar practice used during the seventeenth, eighteenth, and nineteenth centuries for quickly preparing a metalpoint ground for sketching outlines for miniatures or for writing on little ivory sheets.

"It is impossible to determine when metalpoint media were first used for producing sketches and studies in the form and character we now assign to master drawings. But during the fourteenth century both Petrarch and Boccaccio mention drawing with the stylus. The former, in his sonnets to Laura, wrote of Simone (Martini) taking the likeness of his love with the metalpoint and the latter in the Decamerone expressed his admiration for the skill of the incomparable Giotto in the statement that there was nothing in nature which the master could not draw or paint with the stylus, pen, or brush. Although we may hesitate to accept these statements at face value, nevertheless they indicate that the metallic stylus was an accepted instrument for drawing by artists of the late middle ages" (Watrous, The Craft of Old Master Drawings [1957] 4).

For centuries after the Middle Ages Theophilus's work was forgotten until the poet, philosopher, and critic Gotthold Ephraim Lessing rediscovered the text while he worked as librarian in Wolfenbüttel around 1770.