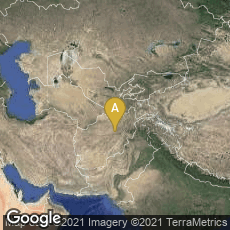 Discovery of the World's Oldest Oil Paintings in Caves in Afghanistan In 2009 an international team of conservators and archaeologists annouced that they discovered the oldest known oil paintings in a maze of caves in Afghanistan's Bamiyan Valley, where the Taliban blew up two gigantic stone Buddha statues in 2001. The discovery reversed the common perception that oil painting originated in Europe, where the earliest examples date to the early 12th century CE.

The cave murals were restored and studied by the National Research Institute for Cultural Properties in Tokyo, as a UNESCO/Japanese Fund-in-Trust project.

"Since most of the paintings have been lost, looted or deteriorated, we are trying to conserve the intact portions and also try to understand the constituent materials and painting techniques," Yoko Taniguchi, a researcher at the National Research Institute for Cultural Properties in Tokyo, told Discovery News.

" 'It was during such analysis that we discovered oily and resinous components in a group of wall paintings.'

"Painted in the mid-7th century A.D., the murals have varying artistic influences and show scenes with knotty-haired Buddhas in vermilion robes sitting cross-legged amid palm leaves and mythical creatures.

"Most likely, the paintings are the work of artists who traveled on the Silk Road, the ancient trade route between China, across Central Asia's desert to the West" (http://dsc.discovery.com/news/2008/02/19/oldest-oil-painting.html, accessed 07-11-2009).