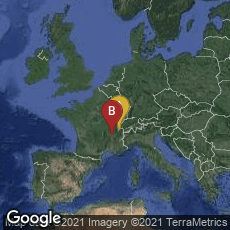 This work on the reform of Christianity developed a nontrinitarian Christology which Calvin and the Catholic church considered heretical.  On pp. 168-73 the book also contained the first printed description of the lesser or pulmonary circulation of the blood. The lesser circulation had previously been discovered by Ibn-Al-Nafis in his commentary on the anatomy of the Canon of Avicenna published in manuscript in 1268, but this was not rediscovered until the 20th century. (Re Ibn-Al-Nafis see J. Norman (ed) Morton's Medical Bibliography 5th ed. [1991] no. 753.)

"On 16 February 1553, Servetus, while in Vienne, was denounced as a heretic by Guillaume Trie, a rich merchant who had taken refuge in Geneva and was a very good friend of Calvin, in a letter sent to a cousin, Antoine Arneys, living in Lyon. On behalf of the French inquisitor Matthieu Ory, Servetus as well as Arnollet, the printer of Christianismi Restitutio, were questioned, but they denied all charges and were released for lack of evidence. Arneys was asked by Ory to write back to Trie, demanding proof. On March 26, 1553, the letters sent by Servetus to Calvin and some manuscript pages of Christianismi Restitutio were forwarded to Lyon by Trie. On April 4, 1553 Servetus was arrested by the Roman Catholic authorities, and imprisoned in Vienne. He escaped from prison three days later. On June 17, he was convicted of heresy by the French inquisition, 'thanks to the 17 letters sent by Jehan Calvin, preacher in Geneva, 'and sentenced to be burned with his books. An effigy and his books were burned in his absence" (Wikipedia article on Michael Servetus, accessed 02-05-2009).

Numerous accounts of Servetus' execution state that he was burned along with the entire edition of his book. Even if that was not the case virtually the entire printing of 1000 copies was destroyed, as only three copies of the original edition survive— Richard Mead's copy in the Bibliothèque nationale de France, a copy in the Austrian National Library, Vienna, and a copy lacking the title page and the first 16pp., said to be John Calvin's personal copy, in the library of William Hunter at the University Library, Edinburgh.   (J. Norman (ed). Morton's Medical Bibliography 5th ed. [1991] no. 754.)

♦ Though Servetus escaped execution with his books, he was arrested in Geneva a few months later after having attended one of Calvin's sermons, and was sent to trial. On October 24, 1553 Servetus was sentenced to death by burning for denying the Trinity and infant baptism. When Calvin requested that Servetus be executed by decapitation rather than fire, Farel, in a letter of September 8, chided Calvin for undue leniency, and the Geneva Council refused his request. On October 27 Servetus was burned at the stake just outside Geneva with what was believed to be the last copy of his Christianisimi restitutio chained to his leg. Historians record his last words as: "Jesus, Son of the Eternal God, have mercy on me" (Adapted from the Wikipedia article on Michael Servetus).