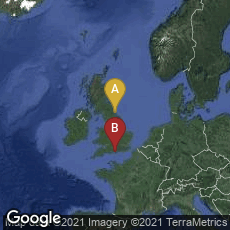 The Petersburg Bede: the Earliest Known Example of an Historiated Initial 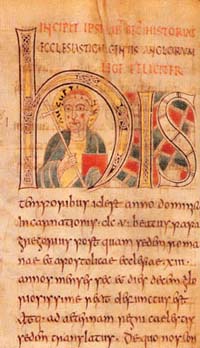 The earliest known example of an historiated initial—an enlarged letter at the beginning of a paragraph or other section of text which contains a picture—is in the St Petersburg Bede, an Insular English manuscript, which was written about 750 CE. Only four 8th century manuscripts of Bede survive. The St. Petersburg Bede and the manuscript known as the "Moore Bede", preserved in Cambridge University Library, are the earliest witnesses to Bede's text.

The Saint Petersburg Bede (Saint Petersburg, National Library of Russia, lat. Q. v. I. 18), formerly known as the Leningrad Bede, is one of the two earliest surviving illuminated manuscripts of Bede's Historia ecclesiastica gentis Anglorum (Ecclesiastical History of the English People). Traditionally, it was attributed on palaeographic grounds to Bede’s monastery at Wearmouth-Jarrow. It has also been traditionally dated to 731/732 × 746 on the basis of the so-called Memoranda, a series of retrospective dates found in the margins of Bede’s recapitulo in Book V Chapter 24. The validity of these Memoranda (and similar notes in the Moore Bede) as evidence for the precise year in which the manuscript was copied has been vigorously challenged, and while it may not be possible to assign the manuscript to a specific year, it seems unlikely that it was copied much after the middle of the eighth century.

After the huge disruption of French monastic libraries during the French Revolution, the manuscript was acquired by Russian  diplomat, paleographer, secretary of the Russian Embassy in France, and collector of manuscripts and books, Peter Petrovich Dubrovsky, who later sold it to the Russian Imperial Library.

M. B. Parkes, The Scriptorium of Wearmouth-Jarrow, Jarrow Lecture 1982.

♦ The Moore Bede and the St. Petersburg Bede also contain the earliest known copies of Caedmon's Hymn, the only surviving work of the earliest English poet whose name is known.