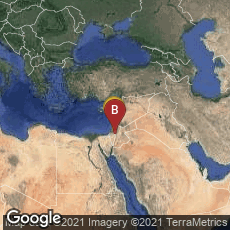 A: Jerusalem, B: South District, Israel The Second Jewish Temple. Model in the Israel Museum.

The first Jewish-Roman War (66-73 CE) (The Great Revolt, המרד הגדול‎, ha-Mered Ha-Gadol, Primum Iudæorum Romani Bellum), ended with destruction of the Second Temple, which stood on Temple Mount, and the fall of Jerusalem. Legions under Titus beseiged and destroyed Jerusalem, looted and burned Herod's Temple and Jewish strongholds (notably Masada in 73), and enslaved or massacred a large part of the Jewish population. This contributed to the numbers and geography of the Jewish Diaspora, as many Jews were scattered after losing their state, or sold into slavery through the empire.

"Estimates of the death toll range from 600,000 to 1,300,000 Jews: there was 'no room for crosses and no crosses for the bodies'. Over 100,000 died during the siege, and almost 100,000 were taken to Rome as slaves. Many fled to areas around the Mediterranean. The Romans hunted down and slaughtered entire clans, such as descendants of the House of David. On one occasion, Titus condemned 2,500 Jews to fight with wild beasts in the amphitheater of Caesarea in celebration of his brother Domitian's birthday" (Wikipedia article on the First Jewish-Roman War, accessed 11-24-2008).