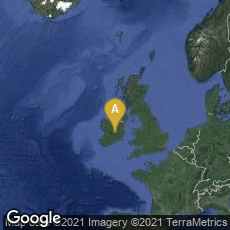 The Book of Dimma, an Irish Pocket Gospel Book Evangelist Luke in the Book of Dimma (TCD, MS 59, f. 54v). In the Library of Trinity College, Dublin. 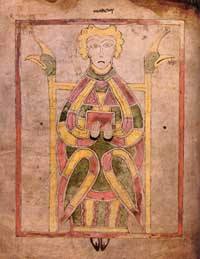 The Book of Dimma, an 8th century Irish pocket Gospel Book signed by its scribe, Dimma MacNathi, at the end of each of the Four Gospels, originated from the Abbey of Roscrea, founded by St. Cronan in County Tipperary, Ireland.

"Dimma has been traditionally identified with the Dimma, who was later Bishop of Connor, mentioned by Pope John IV in a letter on Pelagianism in 640. This identification, however, cannot be sustained. The illumination of the manuscript is limited to illuminated initials, three Evangelist portrait pages and one page with an Evangelist's symbol. In the 12th century the manuscript was encased in a richly gilt case" (Wikipedia article on the Book of Dimma, accessed 11-22-2008)

The Book of Dimma is preserved at Trinity College Library, Dublin.