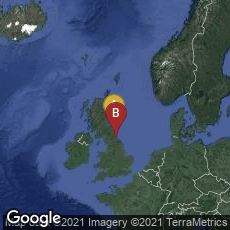 The Stonyhurst Gospel, the Earliest European Book that Survived Completely Intact in its Original Binding The St. Cuthbert Gospel of St. John, also known as the Stonyhurst Gospel, a pocket-sized (3.5 x 5 inch) 7th-century gospel book written in Latin is one of the smallest surviving early Latin manuscripts. It belonged to Saint Cuthbert of Lindisfarne, and was discovered in 1104 when Cuthbert's tomb was opened so that his relics could be transferred to a new shrine behind the altar of Durham Cathedral. The manuscript had been placed in the tomb of Saint Cuthbert probably a few years after his death in 687. It was kept at Durham cathedral with other relics until the Dissolution of the Monasteries by Henry VIII between 1536-1541, after which it was preserved by a series of private collectors. It is the earliest English book that survived completely in its original state in its original binding, and only manuscript written entirely in Capitular Uncial, a display script found exclusively in manuscripts written in the scriptorium of Wearmouth-Jarrow Abbey, where it was written during the abbacy of Ceolfrith.

"The state of preservation of this small volume (less than 5½ inches tall) might fairly be described as miraculous. Its leather is crimson-stained goatskin, stretched over thin wooden boards. Various details of the workmanship and decoration reveal a generally Mediterranean if not specifically Coptic influence. A direct Coptic influence is not indeed impossible, the relations between Coptic and Hiberno-Saxon art at this time having been long recognized; but it should be recalled that bookbinding models would also have been available at Wearmouth and Jarrow from the codices, already mentioned, recently imported from Italy. In any case the specific decorative technique of the upper cover of the Stonyhurst Gospel is precisely paralleled in Egyptian leatherwork. This technique involves the applciation of glued cords to the board, laid out in a pattern. Leather is then stretched over the board, and worked around the cords, bring out the pattern in relief.

"Three more European leather bindings of roughly comparable antiquity are preserved in the Landesbibliothek, Fulda. All come from the monastery of Fulda, where by ancient tradition they were thought to have belonged to St. Boniface (d. 754), the Anglo-Saxon martyr and apostle to the Germans, who was buried there. The binding of one of these, the Cadmug Gospels (written by an Irish scriber of that name), has many points of similarity with the Stonyhurst Gospel binding. Both are small volumes; their leather is similar in color and character; and both have pigments in the scribed lines decorating the covers. They are sewn in what may very generally be called the Coptic manner: the quires are linked by the sewing thread(s), without the use of cords, and the threads are attached directly to the boards, by loops passing through holes drilled in the boards near their back edges. . . ." (Needham, Twelve Centuries of Bookbindings 400-1600 [1979] 57-58).

In February 2014 a digital facsimile of the manuscript was available from the British Library at this link.