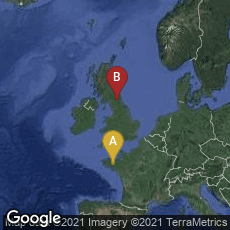 In 410 Roman legions withdrew from the province of Britannia. With the departure of the last legions from Britain, and the end of Roman rule, literacy gradually left England. Within 40 to 50 years from the time of the departure of the Romans to the arrival in 597 of Augustine of Canterbury on a mission to convert the Anglo-Saxons, and for a period thereafter, it is believed that the people of Britain were, with few exceptions, essentially illiterate.

Roughly 40 years after the Romans departed, in 449, Saxons, Angles, and Jutes conducted large scale invasions of Britain, causing numerous members of the Christian aristocracy to flee to Bretagne, France. The environment in Britain became increasingly hostile to Christians, and increasingly illiterate.

The period from the departure of the Roman legions to the arrival of Augustine of Canterbury in 597 is often called Sub-Roman Britain or Post-Roman Britain. The date taken for the end of this period is arbitrary in that sub-Roman culture continued in the West of England, and in Wales, for a period of time thereafter. Reflecting the decline of literacy and of educational institutions, very little written material survived from the period.

"Two primary contemporary British sources exist: the Confessio of Saint Patrick and Gildas' De Excidio et Conquestu Britanniae (On the Ruin and Conquest of Britain). Patrick's Confessio and his Letter to Coroticus reveal aspects of life in Britain, from where he was abducted to Ireland. It is particularly useful in highlighting the state of Christianity at the time. Gildas is the nearest to a source of Sub-Roman history but there are many problems in using it. The document represents British history as he and his audience understood it. Though a few other documents of the period do exist, such as Gildas' letters on monasticism, they are not directly relevant to British history. Gildas' De Excidio is a jeremiad: it is written as a polemic to warn contemporary rulers against sin, demonstrating through historical and biblical examples that bad rulers are always punished by God — in the case of Britain, through the destructive wrath of the Saxon invaders. The historical section of De Excidio is short, and the material in it is clearly selected with Gildas' purpose in mind. There are no absolute dates given, and some of the details, such as those regarding the Hadrian's and Antonine Walls are clearly wrong. Nevertheless, Gildas does provide us with an insight into some of the kingdoms that existed when he was writing, and how an educated monk perceived the situation that had developed between the Anglo-Saxons and the Britons.

"There are more continental contemporary sources that mention Britain, though these are highly problematic. The most famous is the so-called Rescript of Honorius, in which the Western Emperor Honorius tells the British civitates to look to their own defence. The first reference to this rescript is written by the 6th century Byzantine  scholar Zosimus and is found in the middle of a discussion of southern Italy; no further mention of Britain is made, which has led some, though not all, modern academics to suggest that the rescript does not apply to Britain, but to Bruttium in Italy. The Gallic Chronicles, Chronica Gallica of 452 and Chronica Gallica of 511, say prematurely that 'Britain, abandoned by the Romans, passed into the power of the Saxons' and provide information about St Germanus and his visit(s) to Britain, though again this text has received considerable academic deconstruction. The work of Procopius, another 6th century Byzantine writer, makes some references to Britain, though the accuracy of these is uncertain."

"There are numerous later written sources that claim to provide accurate accounts of the period. The first to attempt this was the monk Bede, writing in the early 8th century. He based his account of the Sub-Roman period in his Historia ecclesiastica gentis Anglorum (written around 731) heavily on Gildas, though he tried to provide dates for the events Gildas describes. It was written from an anti-Briton point of view. Later sources, such as the Historia Brittonum often attributed to Nennius, the Anglo-Saxon Chronicle (again written from a non-Briton point of view, based on West Saxon sources) and the Annales Cambriae, are all heavily shrouded in myth and can only be used with caution as evidence for this period. There are also documents giving Welsh poetry (of Taliesin and Aneirin) and land deeds (Llandaff charters) that appear to date back to the 6th century" (Wikipedia article on Sub-Roman Britain, accessed 04-18-2014).