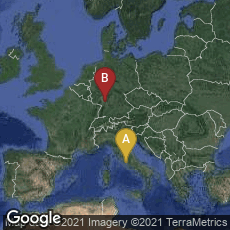 Though many books in the Bibliotheca Palatina of Heidelberg were "torn or dispersed into private hands" when troops under Maximilian I of Bavaria sacked Heidelberg in 1622 during the Thirty Years War, Maximilian decided to confiscate the remaining manuscripts as war booty, and presented them to Pope Gregory XV as "a sign of his loyalty and esteem." 196 cases containing about 3500 manuscripts were transported across the Alps to Rome on 200 mules under the supervision of scholar Leo Allatius.

In 1623 these books were incorporated into the Vatican Library with a Latin bookplate which may be translated as "I am from the library captured in Heidelberg and sent as spoils of war to Pope Gregory XV by Maximilian, Duke of Bavaria, etc., . . . A.D. 1623."