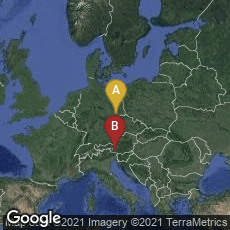 The Sachsenspiegel, the Most Important Law Book of the German Middle Ages One of the first prose works in the Low German (Middle Saxon) language, The Sachsenspiegel("Saxon Mirror") (Mscr.Dresd.M.32), is the most important law book and legal code of the German Middle Ages. "Written ca. 1220 as a record of existing law, it was used in parts of Germany until as late as 1900, and is important not only for its lasting effect on German law, but also as an early example of written German prose, as the first large legal document to be written in German, instead of Latin. A Latin edition is known to have existed, but only fragmented chapters remain."

"Four (of the original seven) illuminated manuscript copies are still extant. They are named after their present locations: Heidelberg, Oldenburg, Dresden, and Wolfenbüttel, and date from about 1300 to 1370."

"The Sachsenspiegel is believed to have been compiled and translated from Latin by the Saxon administrator Eike von Repgow at the behest of his liege lord Graf Hoyer von Falkenstein in the years 1220 to 1235. Where the original was compiled is unclear. It was thought to have been written at Burg Falkenstein, but Peter Landau, an expert in medieval canon law recently suggested that it may have been written at the monastery of Altzelle (now Altzella).

"The Sachsenspiegel served as a model for law books in German (Middle High German) like the Augsburger Sachsenspiegel, the Deutschenspiegel, and the Schwabenspiegel. Its influence extended into Eastern Europe, the Netherlands, and the Baltic States." (quotations from the Wikipedia article on the Sachsenspiegel, accessed 11-23-2008).

A digital facsimile of the Dresden copies is available from digitial.slub-dresden.de at this link.