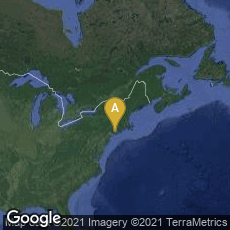 In 1973 American chemist Paul Lauterbur, working at the State University of New York at Stony Brook, developed a way to generate the first Magnetic Resonance Images (MRI), in 2D and 3D, using gradients. Lauterbur described an imaging technique that removed the usual resolution limits due to the wavelength of the imaging field. He used

"two fields: one interacting with the object under investigation, the other restricting this interaction to a small region. Rotation of the fields relative to the object produces a series of one-dimensional projections of the interacting regions, from which two- or three-dimensional images of their spatial distribution can be reconstructed" (http://www.nature.com/physics/looking-back/lauterbur/index.html, accessed 11-23-2008).

This was the beginning of magnetic reasonance imaging.

"When Lauterbur first submitted his paper with his discoveries to Nature, the paper was rejected by the editors of the journal. Lauterbur persisted and requested them to review it again, upon which time it was published and is now acknowledged as a classic Nature paper.  The Nature editors pointed out that the pictures accompanying the paper were too fuzzy, although they were the first images to show the difference between heavy water and ordinary water. Lauterbur said of the initial rejection: 'You could write the entire history of science in the last 50 years in terms of papers rejected by Science or Nature' (Wikipedia article on Paul Lauterbur, accessed 03-08-2012).

♦ In September 2020 Lauterbur's 65-minute Nobel Lecture could be watched at NobelPrize.org at this link.