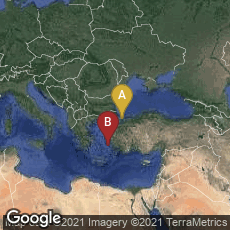 A: İstanbul, Turkey, B: Greece

Codex Petropolitanus Purpureus, Written in the Imperial Scriptorium of Constantinople and Dismembered by Crusaders

The Codex Petropolitanus Purpureus, a 6th century Greek New Testament codex gospel book with very many lacunae, originated in the Imperial Scriptorium of Constantinople, and was dismembered by crusaders in the 12th century. The manuscript text is in two columns, 16 lines, in large majuscules (capital letters), measuring 32 x 27 cm. The lettering is in silver ink on vellum dyed purple, with gold ink for nomina sacra. The text is of the Byzantine text-type in a very early stage, but some parts represent Caesarean readings.

In 1896 Nicholas II of Russia commissioned Fyodor Uspensky's Russian Archaeological Institute to buy the greater part of it for the Imperial Public Library in St. Petersburg.

Perhaps as a result of its 12th century dismembering, the 231 surviving folios of the manuscript are preserved in an unusually large number of different libraries in different countries: