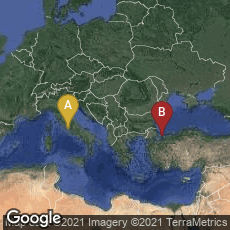 Image Source: commons.wikimedia.org
Commemorative disc of the Emperor Theodosius I, made in silver and found in 1847 in Almendralejo (Badajoz, Spain). This photo is of a replica exhibited in the National Museum of Roman Art in Mérida (Spain). The original is deposited in the Royal Academy of History and is not accessible.

In 393, two years before his death, Emperor Flavius Theodosius (Theodosius I), divided the Roman Empire into two parts. The Western Roman Empire Theodosius placed in the hands of his younger son Flavius Honorius, who he declared Augustus in 393 when Honorius was only nine years old.

Honorius's "throne was guarded by his principal general, Flavius Stilicho, who was successively Honorius's guardian (during his childhood) and his father-in-law (after the emperor became an adult). Despite Stilicho's generalship, the empire lost ground; and after the guardian's execution, Honorius's empire moved towards the verge of collapse" (Wikipedia article on Honorius [emperor]) accessed 05-10-2009).

The Eastern Roman Empire or Byzantine Empire Theodosius placed in the hands of his older son Flavius Arcadius. Ten years earlier, in 383 Theodosius had declared Arcadius Augustus, and had co-ruled the Eastern half of the Roman Empire with him until 393.