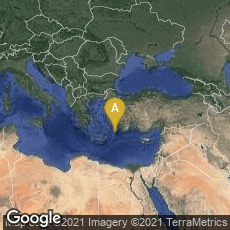 Artist's rendering of Hipparchus; as with virtually all individuals from ancient Greece, no reliable images are known except for portraits of rulers that might have appeared on coinage.

Abut 150 BCE Hellenistic astronomer, geographer, and mathematician, Hipparchos of Rhodes, produced a table of chords— an early example of a trigonometric table.

". . . some historians go so far as to say that trigonometry was invented by him. The purpose of this table of chords was to give a method for solving triangles which avoided solving each triangle from first principles. He also introduced the division of a circle into 360 degrees into Greece" (Mactutor biography of Hipparchus, accessed 11-27-2008).