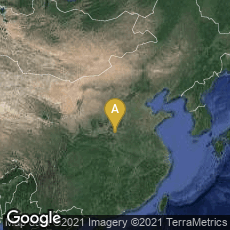 The Invention of Paper in China Postage stamp portraying Cai Lun, eunuch official credited with the invention of paper, issued by People's Republic of China in 1962

In 105 CE Cai Lun, a eunuch and official of the Chinese Imperial Court, reported to the Emperor of China that paper had been invented. Traditionally,  Cai Lun (Ts'ai Lun) has been regarded in China as the inventor of paper. Twentieth century discoveries of ancient paper fragments in North and Northwest China have pushed the date of the invention of paper back about two hundred years earlier. By the second century China was producing paper made from rags.

♦ Paper was not invented specifically for writing. “It was extensively used in China in the fine and decorative arts, at ceremonies and festivals, for business transactions and records, monetary credit and exchange, personal attire, household furnishings, sanitary and medical purposes, recreations and entertainments and so on” (Tsien Tsuen-Hsuin, Science and Civilisation in China, V, pt. 1: Paper and Printing [1985] 2).