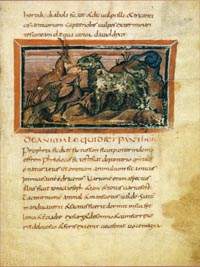 The Bern Physiologus, (Bern, Burgerbibliothek, Cod. 318) an illuminated copy of the Latin translation of the Physiologus, was probably produced at Reims about 825 CE. It is one of the oldest extant illustrated copies of the Physiologus, a didactic text written or compiled in Greek by an unknown author in Alexandria, between the second and fourth centuries.

"The Physiologus consists of descriptions of animals, birds, and fantastic creatures, sometimes stones and plants, provided with moral content. Each animal is described, and an anecdote follows, from which the moral and symbolic qualities of the animal are derived. Manuscripts are often, but not always, given illustrations, often lavish."

The book was translated into Latin in about 400, then into European and Middle-Eastern languages. Numerous illuminated manuscript copies survive.  For over 1000 years the text —a predecessor to bestiaries — retained its influence in Europe over ideas of the "meaning" of animals.  Medieval poetical literature is full of allusions that can be traced to the Physiologus tradition, and the text also exerted great influence on the symbolism of medieval ecclesiastical art: symbols like the phoenix rising from its ashes and the pelican feeding her young with her own blood remain well-known.

"Epiphanius used Physiologus in his Panarion and from his time numerous further quotations and references to the Physiologus in the Greek and the Latin Church fathers show that it was one of the most generally known works of Christian Late Antiquity. Various translations and revisions were current in the Middle Ages. The earliest translation into Latin was followed by various recensions" (Wikipedia article on Physiologus, accessed 11-27-2008)

A digital facsimile of the manuscript is available from Burgerbibliothek Bern at this link.