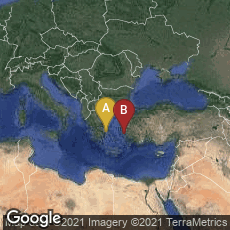 A: Athina, Greece, B: Greece

Imagined portrait of Pisistratos and the left hand of Alcibiades by Ingres. Painted between 1824 and 1834. The original isin the Musée Ingres, Montauban, France.

"The increase of the book trade made it possible for private individuals to form libraries. Even if the tradition that sixth-century tyrants such as Pisistratus of Athens and Polycrates of Samos possessed large collections of books is discounted (Anthenaeus I.3A), it is clear that by the end of the fifth century private libraries existed. Aristophanes pokes fun at Euripides for drawing heavily on literary sources in composing his tragedies (Frogs 943), and his own work, being full of parody and allusion, must have depended to some extent on a personal book collection.

"There is no trace of any general library maintained at the public expense at Athens, but it is likely that official copies of plays performed at the leading festivals such as the Dionysia were kept at the theatre or in the public record office. Pseudo-Plurarch (Lives of the ten orators 841F) ascribes to the orator Lycurgus (c. 390-324 BCE) a proposal to keep official copies in this way, but the need would probably have arisen earlier. We know that after the original performance plays were revived from time to time. New copies of the text must have been needed for the actors, and if they had been obliged to obtain these by a process of transcription from private copies it would be surprising that an almost complete range of plays survived into the Hellenistic age" (Reynolds & Wilson, Texts and Transmission, 3rd ed. [1991] 5).