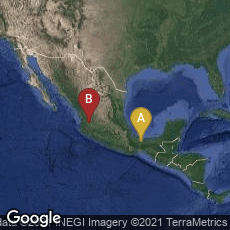 Part of the Huexotzinco Codex, written on amate.

Natives of pre-Columbian Mesoamerica manufactured Amatl (Nahuatl: āmatl, Spanish: amate or papel amate) during the first millenium BCE. This was a form of paper made by boiling the inner bark of several species of trees, particularly fig trees (genus Ficus) such as F. cotinifolia and F. padifolia. The resulting fibrous material was pounded with a stone to produce a stretchy and somewhat delicate paper, colored light brown with corrugated lines. Stone iconography from the period contains depictions of items thought to be paper. For example, Monument 52 from the Olmec site of San Lorenzo Tenochtitlán illustrates a person adorned with ear pennants of folded paper.

"The oldest known amate paper dates back to 75 CE. It was discovered at the site of Huitzilapa, Jalisco. Huitzilapa is a shaft tomb culture site located northwest of Tequila Volcano near the town of Magdalena. The crumpled piece of paper was found in the southern chamber of the site's shaft tomb, possibly associated with a male scribe. Rather than being produced from Trema micrantha, from which modern amate is made, the amate found at Huitzilapa is made from Ficus tecolutensis.[5] Iconography (in stone) dating from the period contains depictions of items thought to be paper. For example, Monument 52 from the Olmec site of San Lorenzo Tenochtitlán illustrates an individual adorned with ear pennants of folded paper.[6] The oldest known surviving book made from amate paper may be the Grolier Codex, which Michael D. Coe and other researchers have asserted is authentic and dated to the 12th-13th century CE (Wikipedia article on Amate, accessed 9-2020).