The Book Trade in Cicero's Rome 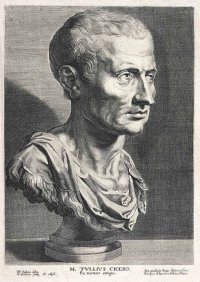 "We hear nothing of a book trade at Rome before the time of Cicero. Then the booksellers and copyists (both initially called librarii) carried on an active trade, but do not seem to have met the high standards of a discriminating author, for Cicero complains of the poor quality of their work (Q.f. 3-.4.5, 5.6). Most readers depended upon borrowing books from friends and having their own copies made from them, but this too demanded skilled copyists. It was perhaps for such reasons that Atticus, who had lived for a long time in Greece and there had some experience of a well-established book trade, put his staff of trained librarii at the service of his friends. It is not easy to see whether Atticus is at any given moment obliging Cicero as a friend or in a more professional capacity, but  it is clear that Cicero could depend on him to provide all the services of a high-class publisher. Atticus would carefully revise a work for him, criticize points of style or content, discuss the advisability of publication or the suitability of a title, hold private readings of the new book, send out complimentary copies, organize its distribution. His standards of excecution were of the highest and his name a guarantee of quality" (Reynolds & Wilson, Scribes and Scholars, 3rd. ed. [1991] 23-24).