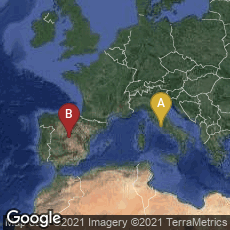 The first mention of literary works published in parchment codices is found in Marcus Valerius Martialis (Martial), a Latin poet from Hispania (the Iberian Peninsula) best known for his twelve books of Epigrams, published in Rome between 86 and 103 CE. In poems written during the years 84-86 he emphasized their compactness, their handiness for the traveller, and provided the name of the shop where such novelties could be bought (I.2.7-8):


You who long for my little books to be with you everywhere and want to have companions for a long journey, buy these ones which parchment confines within small pages: give your scroll-cases to the great authors - one hand can hold me. So that you are not ignorant of where I am on sale, and don't wander aimlessly through the whole city, I will be your guide and you will be certain: look for Secundus, the freedman of learned Lucensis, behind the threshold of the Temple of Peace and the Forum of Pallas.       (Translated by Nick, http://martialis.blogspot.com/2004_06_01_archive.html#108637752590707142, accessed 02-28-2014).

"Athough there is one surviving fragment of a parchment codex written about A.D. 100 (the anonymous De Bellis Macedonicis, P. Lit. Lond. 121) the pocket editions that Martial was at pains to advertise were not a success. The codex did not come into use for pagan literature until the second century; but it rapidly gained ground in the third, and triumphed in the fourth" (Reynolds & Wilson, Scribes and Scholars, 3rd ed., [1991] 34).

"The poet Martial, writing in or near 85 A.D., described codex books, though not using that term for them. In perhaps the clearest of his several references, he described a book containing the works of Homer in 'muliplici pelle,' much-folded or many-layered leather. The context of his references suggests that the codices he had in mind were curiosities, his general point being that by this means (as compared to the standard alternative, the roll) a substantial text could be contained in quite a small, handy volume. His precise meaning is not certain; some scholars have conjectured that Martial was describing books in minature scripts" (Needham, Twelve Centuries of Bookbindings 400-1600 [1979] 4).